Inside the box we have some nice packaging as usual from Razer. I always have to give them props for the unboxing experience. Inside you’ll find the headset, the audio hub which is going to be like the base for all your connectivity and your wireless pairing, an optical cable if you choose to use that, plug two micro USB cables, one for charging and one for connecting it.

They also include a stand for the Thresher which is pretty cool. I definitely appreciate something like this being included with the headset because not only does it give it a nice place to stay when you’re not using it, but it also keeps everything organized.

The first thing we’re going to do is go over the layout and the buttons on the Thresher Ultimate. On the bottom of the ear cups is where pretty much everything is located. On the left side is the little volume wheel for your microphone and on the right side is the volume wheel for the headsets overall volume. Both of the wheels can be pushed in to either mute the headset or mute the microphone.

On the left ear cup is also a micro USB port for charging and the power button to turn the headset on and off or to pair to the hub you have to hold in for three seconds.

The retractable boom mic on the bottom on the left ear cup. When you put it on it’s nicely stowed away and when you want to use it you just pull it out it and it’s right in front your mouth for you which is really great. I like when headsets do this because it’s not just there dangling when it’s not in use, you can just put it back into the ear cup, so it won’t get bent.

I really like the overall design of the Thresher Ultimate, it doesn’t look too aggressive but at the same time it lets you know it’s a Razer headset.

We have 50mm drivers and extremely soft leather ear pads that are like pillows on your ears; very, very comfy. On the side of the drivers it’s a partially open grill design but at the same time it’s still considered closed back. The way that the headband is constructed is really great because it allows the headset to sit on your head while applying the zero pressure. You can push up the band itself and you have two aluminum bands on top mostly to act as structure support.

The band itself is made of mesh and the padding inside is really nice. It just sits on your head with zero pressure and it adjusts by itself, I’m big fan of the comfort. Another feature that I always appreciate is that the ear cuffs themselves stay flat around your neck or if you want to lay them flat on your desk you can do that as well.

The audio base is nice and compact which is always good. You have the Razer logo on top, on the front of the base is the power button with a little green strip light to let you know when it’s powered on. On the back is going to be all your connections, you have your optical in/outs, an Xbox and a PC switch, your micro USB port for connecting it to your PC or your Xbox one and the USB port for charging your headset.

Another cool thing is the included headphone stand and the audio base fit together. The headphone stand just goes right on top of the base and snaps into place. Now you can have the base, headphone stand and your headphones sitting all as one unit when you’re not using it. I can definitely appreciate that design choice here from Razer keeping down on clutter is always good.

For audio quality I could say the Thresher Ultimate for being a wireless headset, I would give it a 9 out of 10 when it’s just on the regular audio settings. I found that on the Xbox I mainly used it for games like FIFA and Madden, so I wasn’t really using them to their fullest.

On PC I used them a lot for games like Battlefield or Battlegrounds where positional audio is everything and I found the audio to be crystal clear which you expect that for that $250 price point. I do want to mention one thing which is on top of the audio base you have a little button which can enable the Dolby Surround Sound and it’s one of the big selling points for this wireless headset, but I have to say that it completely kills the audio experience. It seemed only boost the mids a little bit but everything else gets drowned out.

When I was playing Battlegrounds, the plane was flying over me with it disabled that I could directly here where it was coming from. Once I had Dolby turned on everything sound like it was in both ear cups, so I lost that directional audio, so I cannot recommend having Dolby on when directional audio is of utmost importance.

The mic test which is probably the second most important thing. The mic is automatically enabled once you have your PC or your Xbox powered on and you can use it for chatting with your friends online or your Xbox party. Honestly, I was expecting a lot better, everything just sounded hollow, tinny and far away. For $250 I wanted some better mic quality out of this, especially with things out there like the Antlion ModMic and the Massdrop MiniMic sound ten times better for $50 and under. Since this is an all-in-one wireless headset, I guess they are cutting some quality on the mic but at the end of the day, it’s going to be totally fine for gaming with your friends.

To wrap up I would give the Razer Thresher Ultimate’s a solid 8/10. They are definitely one of the most comfortable headsets that I’ve tried, and they are nice and light. The headband and ear cups are very comfortable and the sound quality stock without the Dolby Surround enabled is fantastic. There is zero distortion or buzzing in the background which you sometimes find with wireless headsets as they usually have some interference but there was nothing really audible with these.

The biggest downfall is going to have to be the Dolby Surround Sound, but it shouldn’t detract from what is otherwise an excellent gaming headset as it can be tweaked with the Razer Surround software. The mic overall could have been better but it’s still very passable. Finally, the price point is going to be a little bit of a con for some people but if you need a wireless headset for both the Xbox One and your PS4 or your PC like this is a pretty good option. You do that the include headset stand and the great audio base which connect together into one compact unit which is really great. I think an 8/10 is a pretty solid rating for these.

The Razer Thresher Ultimate made our Best Wireless Gaming Headsets of 2018 which you should definitely check out to see how it stacked up against the rest of the competition. 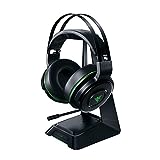