This is the HyperX Cloud Mix. It’s a wired/wireless gaming headset, and it’ll set you back around $200, which is a lot of money. I’m sure it’ll raise a lot of eyebrows, because we’re all familiar with the Cloud family and how good they are, especially the Cloud Flight, the Cloud Alpha’s and the Cloud Stinger. These are all great headsets that are priced appropriately for the features they offer.

When I looked at the price of the Cloud Mix, I really started scratching my heads because the only additional improvement that I see with this headset is the implementation of Bluetooth technology and that’s pretty much it. So how is this particular headset going to stand out against its competitors? Let’s find out.

Honestly, the Cloud Mix is really not that different from the other Cloud headsets, from the outside at least. You see, it still maintains the same frame structure with the signature leatherette memory foam ear cups. I do appreciate the stealth look on the Mix, because it features a few matte-like elements. However, the HyperX logo does seem to stand out quite a bit, so maybe next time they could implement a tone-on-tone finish and minimize the size of the logo as well. That’d be much appreciated.

The build quality on the Cloud Mix remains the same, just like the Alpha headset. It’s very flexible and rigid, no signs of creaking as well, and that should be expected for $200. The headband is not self-adjustable, and that’s my personal preference. The adjustable sliders are well-defined and intact. The clamping force is also very minimum, and I didn’t experience any fatigue wearing this for longer periods of time, just like previous Cloud headsets. So that’s a good thing.

One thing to note is that the ear cups can’t rotate 90 degrees, so it might be a little bit of a challenge resting these around your neck, especially if you plan on traveling with them. The signature memory foam on the ear cups feature plenty of cushion and they’re super comfortable to wear.

Keep in mind that if you live in warmer environments the leatherette material could start to accumulate sweat, so you may have to vent your ears often. The ear cups do provide a good seal around your ears though, and it does a fairly good job isolating background noise.

Now, when it comes to versatility, the HyperX Cloud Mix takes the crown here once again, which I think I keep repeating every time I review one of their headsets. The included braided cables are detachable and that’s obvious given that these are wireless as well. The same story goes with the boom microphone.

The braiding on the cable is certainly unique compared to other headsets on the market. They’re not too thick and they’re very flexible which makes it less prone to kink formation, and that’s awesome.

However, reverberations exhibited by the cable is certainly audible, especially when you’re gaming on it for longer periods of time. This is especially present with the microphone, because it’s a very sensitive microphone.

You can actually start picking up the reverberations as it’s sort of going through your fabric material or whatever you’re wearing. So that’s definitely something to keep note of.

The main 3.5mm cable is 1.3 meters in length, and that’s perfect if you pair this up with your smartphone, provided that it has a headphone jack. You can also find a controller within the cable to adjust the volume and mute the microphone. There’s also a two-meter extension cable that splits into separate headphone and microphone inputs, and this could be used to route it comfortably behind your PC. You also get a carrying bag which is a nice touch.

Moving on to the wireless aspect of the Cloud Mix, there is something you certainly need to pay close attention to. You see, HyperX markets the Mix as a wired gaming headset with Bluetooth technology and that’s really the key difference here compared to other Cloud headsets. Now, don’t confuse yourselves thinking that you can pair this headset via your PC via 2.4 gigahertz receiver, because that’s not the case here. It’s just via Bluetooth, and I believe that they’re using the Bluetooth 4.2 protocol. For $200, that’s disappointing.

Now, hear me out for a second. This is the Cloud Flight by HyperX. It’s a wireless gaming headset, it pairs with your PC or pairs to your PC via this USB receiver, and it can also be used in wired mode via a 3.5-millimeter connector making it very flexible. But when you compare it to something like the Cloud Mix, there honestly isn’t a huge difference, at least to me personally. I don’t feel like you’re getting all that much for $200. Not to mention, this headset can only pair with a single device.

Some of you may think that it’s not a deal-breaker to include a wireless receiver, but what really concerns me the most is the price tag. You see, I would have been completely fine if the Cloud Mix was priced between $140 to $160, because now you would have two headsets competing within the same price range that offers different wireless modes that better suit the customers for their particular needs or their use case scenarios.

In terms of Bluetooth functionality, HyperX has not skimped on the basics. You do get your standard volume up and down buttons that sync with your mobile or system volume levels. Enabling Bluetooth or powering on the headset can be done by holding down the power button for two seconds. The same goes for turning it off. If you want to pair it with a device, simply hold it down for five seconds when powering it up. There’s an LED indicator right above to show the status. There’s also a multifunction button that acts as your play/pause and picking up a phone call or skip tracks by just double pressing on it.

HyperX claims that the battery life lasts for about 20 hours, and I was comfortably able to hit that by pairing it with my smartphone and setting the volume to about 50%. You can recharge the headset via this micro USB port, although I would have wished it was type C.

As I mentioned earlier, the boom microphone on the Cloud Mix is detachable, and it basically features the same hardware as the ones found on the Cloud Alpha. So you’re not getting a significant improvement in terms of microphone quality compared to that headset, which is also really funny because that costs around $100.

My voice sounded very clear, it’ wasn’t too nasally and sounded very natural. There’s very minimal background compression taking place, so it doesn’t really affect the vocals. When I was typing on a mechanical keyboard it did a fairly good job isolating the background noise. However, there is something that I really want you guys to pay close attention to, and that’s the reverberations that the braided cable exhibits, because that’s definitely something that I noticed when I was doing my testing. So if you’re wearing hoodies or something like that with zippers on them, just be careful. That’s all I’ve got to say.

The Mic is omni-directional so it does pick up a fair bit of background noise, but it actually sounds fairly good for a Bluetooth headset. I’m actually surprised by the quality of the on-board microphone, and it should be adequate enough for taking phone calls, all that kind of stuff.

Moving on to how this headset sounds. To be honest, I really have nothing terrible to say about it, because the drivers are built exactly as the Cloud Alpha’s with the dual chamber design that separates the highs, the mid’s, and the bass. The sound stage is surprisingly wider than I expected it to be, and for a closed-back design that’s actually pretty awesome. Given that it now comes with the high res audio certification, it covers a wider frequency range so you can pick up the slightest details within a sound track and the vocals are well-defined. However, I will mention that, just like the Alphas, the bass response on the Mix isn’t too powerful and that could be a deal-breaker for some of you out there, but personally I really enjoyed listening to music and watching a few shows on the Cloud Mix.

Now, gaming on it was a whole lot of fun. I spent a couple of days playing Apex Legends and Overwatch. I must admit it did take away some productivity time, but it was so worth it though. Gunshots feel boomy. When you’re blowing stuff up, the explosions really do sound awesome. Even though the bass response is minimal, the wide sound stage really does add to the experience. You can hear even the slightest details, especially when you’re navigating through the gameplay, you can hear certain directional cues. All in all, it’s just an awesome experience, just playing with the HyperX Cloud Mix. I certainly loved it.

This gaming headset certainly wasn’t a significant improvement over the Cloud Alpha’s. If you’re coming from the Cloud Alpha’s, I don’t think you’re going to be noticing a huge difference upgrading to the Cloud Mix.

To wrap up this review, the Cloud Mix by HyperX is a good headset. It sounds amazing, it’s built really well, it’s very comfortable, and I like the design too. I would’ve preferred if they included at least a USB receiver so that it can seamlessly transition between your PC to your mobile device and of course if you want to connect it in wired mode to your console. 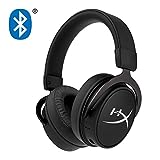