The Void Pro headset comes a year after their last release, the regular Corsair Void, and they’ve made some changes this time around. In this review we’re going to check it out, do mic tests, go over the pros and cons, and all that good stuff in case you want to pick it up.

First up, right out of the box it doesn’t really look too different from the last release. That’s kind of a good thing as it does have a very unique looking style to it. I think it looks pretty simple, and definitely has an angular look to it fitting in perfectly with the usual Corsair branding, nothing really to complain about here.

In terms of buttons, everything you’re going to need to use for the headset is positioned on the left ear cup. On the top back side, you have your power button and a mic mute button and then on the bottom it’s your volume rocker plus a micro USB port for charging.

With the volume rocker, if you press it in for a few seconds that will enable the Dolby Surround Sound, which I’ll talk about in a few minutes. If you just quickly press it in it will go through some of the EQ presets.

On the left ear cup is the microphone and I’m happy to see that Corsair has made some upgrades here, first being that the microphone itself is rubber, and it bends to where you want it to be which is a nice upgrade over the Corsair Void which is very, very stiff, and when I would want to move it, it would just revert back to where it was.

Right in front your mouth is the little LED light strip for notifying you when it is muted or not and to mute the microphone you either hit the mic button or you can just simply fold it upward and the mic will activate and mute.

We get nice mesh ear cuffs in this sort of rhombus shape. It took some time for me to get used to that feeling on my ear but overall since the headset itself is really lightweight it wasn’t much of a problem.

We also have that same soft mesh texture on the top of the headband so it’s not going to be creating any pressure points on the top of your head. One thing I’m always a fan of is when the ear cups rotate around 90 degrees so you don’t have it laying flat on your neck. It’s just a personal preference of mine and I like when headsets include is and happily this one.

In terms of adjustment, you definitely have some flexibility here if you have a larger head. I found that with no adjustment at all it was still kind of big for me so if you have a huge, huge noggin this will definitely fit. Like I said, I keep it on the smallest setting and it fits me just fine.

Let’s talk about the RGB lights for minute. Honestly, RGB lighting on a headset is not important at all. I understand it’s a big craze and Corsair wanted to include it with this because there are tons of other RGB peripherals, but I just never saw the point.

Inside the software you can go in and change the lighting effects around like picking one static color for it to be but when you really only have the Corsair logo on each side of the ear cup it’s not that outstanding. There’s also a blinking effect, breathing effect and a pulse effect.

Honestly, what’s the difference between blinking, breathing, beating and pulsing? They all kind of do the same thing. I’m kind of disappointed in the lighting options.

The next thing we will be looking at is battery life. RGB lighting is going to significantly affect your battery life. Corsair states around 16 hours with RGB on. I usually have that turned off when I’m using it and I found I average 14 hours of use before needing a recharge.

If you leave RGB lighting on I assume you will get significantly less, probably closer to 6-8 hours. If you want my opinion, don’t use RGB lighting at all to save all the battery juice you can. With RGB off you should definitely get a few gaming sessions in before needing a recharge.

The most important part of a headset is going to be the sound quality. As I mentioned before there’s integrated Dolby 7.1 surround sound on the Void Pro RGB headset and that all comes to life when you plug in the Corsair Wireless dongle. It’s a wireless receiver that plugs in any USB port on your PC and once you download the drivers, it just connects. There’s no pairing to be done, easy enough.

One thing I found strange from the last Void headset and that they didn’t make any improvements on was that you cannot use the Void Pro wired at all. If the battery dies you are SOL which doesn’t make sense to me because a lot of companies have a wireless dongle also include a port so that you can connect and still use them if the battery dies.

I’ve found with a lot of emulated 7.1 surround sound headsets that the sound quality always felt severely lacking that’s because it’s always emulated unless there are a complete set of seven individual drivers inside each ear cup. Nine times out of ten you are getting emulated surround sound as with this one is, but I’ve always said even with their last headset that the emulated Dolby Surround Sound is very, very good.

When I started playing some PubG as I usually do, I was rather impressed because I did get a much more wide open sound stage and it really immersed me even more, which is kind of hard to say because you’re already very immersed in that game. There was an instance where I was sitting outside and I knew somebody was in the house next to me and I heard footprints so I quickly turned on Dolby Surround Sound and I was able to pinpoint whether he was on top of the little balcony coming around the back side, the front side, or if he was still in the room ,which was really cool.

I once I heard that I would be able to pinpoint where he was right as he came out and I killed him. I’m very impressed with the Dolby Surround Sound.

In the software you can have other EQs turned on or off just. To have the best emulated surround sound don’t have any other eq’s on, leave it plain. If you don’t choose to use the surround sound there are other EQ so you can either make or pick from. Things like forward enhancing vocals, if you’re watching a movie there’s a movie preset, and a FPS preset, or you can go in and make your own.

I found that for me, when I was playing an FPS game I had the FPS preset turned on and overall it sounds pretty good. I’m usually not a big fan of presets so there a give-and-take with me but the options are.

Perhaps the second most important part of a gaming headset is going to be the mic test. I do have to say that it’s very tinny and sounds very distant. I’m not the biggest fan of the sound quality whatsoever. I was kind of disappointed in the end but there’s not a lot of wireless gaming headsets in this price range that sound good or a decent. This is just very meh, which is kind of disappointing.

I think is going to be ok for online while talking your friends in gaming but I definitely wouldn’t recommend doing any voiceovers because the mic quality just isn’t up to par with where I would want it to be. If you’re hanging out in Discord chatting with your friends, you will be able to hear you just fine. In the end that’s the only thing that really should matter, I just wish it sounded a little bit better given the iteration of this headset, and how much time they’ve had to improve it over the years.

Bringing this all together here with the pros and cons for you guys, the price point at $129.99 I think is very friendly considering you’re getting a very light weight 7.1 surround sound wireless headset like this. Usually they start at around $150 and up typically, especially with RGB lighting.

Getting into the cons, I still wish we could use this wired if the battery died. I don’t understand why that’s not integrated into this USB hub so I can just plug it in. I wish the mic quality was a little bit better, it’s just not what I would like to hear coming out of this.

Lastly I just don’t understand the RGB lighting, it just doesn’t make much sense. I’ll rather take all that out and improve the battery life and possibly even save some money.

Overall I think the Corsar Void Pro RGB’s sounds fantastic, just a couple cons along the way, but overall it is a good headset for a good price.

The Corsair Void Pro RGB made our Best Wireless Gaming Headsets of 2018 which you should definitely check out to see how it stacked up against the rest of the competition. 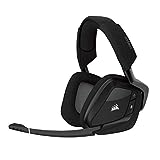