This is the new HyperX Cloud Alpha gaming headset. It’s priced at $100, and supposed to compete against the Logitech G433, the Sennheiser GSP 300, and the SteelSeries Arctis 5, and much more. Let’s see how it stacks up.

Let’s start with the design. Interestingly enough, it’s not that different when compared to the HyperX Cloud gaming headset. You get the exact same red and black accents. I know, red and black accents, I feel like this is the standard gamers’ color scheme, I may be wrong. Either way, you get the same color accents throughout the body, including the stitches on the headband. However, gone are the brushed metal surfaces found on previous Cloud headsets, whereas with the Alpha you’re getting a matte finish on the sides of the ear cups with the HyperX branding and I like that, although I would’ve preferred an all-black design, since it tends to blend in with other accessories.

HyperX did sell the original headset in multiple color configurations, and I’m hoping that the Alpha would receive those options sometime in the near future.

The build quality has hands down been one of HyperX’s major strengths, even with the original headset, and the Cloud Alpha does not disappoint. The aluminum frame is very flexible, yet it maintains that structural rigidity. There are no signs of creaking, and that’s thanks to the minimal use of plastic, but that’s also just how well the headset’s put together. The headband isn’t self-adjustable, and I prefer that over other headsets that are the opposite that feature metal frames above the headband, which would then result in reverberations, and that gets annoying.

Thankfully, the HyperX Cloud Alpha was super comfortable to wear. The clamping force was very minimum, and I didn’t notice head fatigue during my usage, so that’s great. The adjustable sliders are well defined and tighten up to prevent slipping. Unfortunately, the ear cups cannot rotate 90 degrees, unlike its younger brother, the HyperX Stinger. That was one of my favorite features of that headset, but it is something to consider, if you’re planning to rest these pair around your neck.

The signature memory foam around the ear cuffs feature plenty of cushion to prevent your ears from making contact with the drivers. This is an over the ear type of headset and the ear cups provide a good seal around your ears, and they were very comfortable to wear. It does a pretty good job isolating background noise, plus there was very minimal sound leakage so you can comfortably take it with you when traveling.

Speaking of traveling, the HyperX Cloud Alpha takes the crown for versatility. The included braided cables are detachable, so it can easily be replaced.

The boom microphone is also detachable, and it plugs into the headset via a 3.5-millimeter connector. This modularity is much appreciated, as it’s perfect if you want to just use these pair to listen to music while traveling. The headset cable spans at 1.3 meters, and it comes with an inline audio control, which can be used to adjust the volume and mute the microphone. They’re easier to reach and fairly distinguishable.

HyperX includes an extension cable that splits the stereo and mic plugs, and it gives you that extra two meters of length if you want to route it behind your PC. Now, the braided cables are quite thick, so expect minimal kink formation, but it does cause some reverberations when it brushes against anything, so do take note of that.

They have included a carrying bag which can be used to store the microphone and the headset, so that’s convenient.

Just like the Stinger, the Cloud Alpha is also cross platform compatible, meaning you should be able to hook this up to your XBox One or a PS4 controller, or any other mobile device that accepts a 3.5-millimeter headphone/mic input. The shorter cable is definitely a smart inclusion and it’ll certainly help with cable management in those situations.

The detachable microphone is pretty flexible for a quicker maneuverability. It does feature noise canceling characteristics and it does a really good job isolating the background noise. It does a fantastic job isolating the noise. My voice sounds natural and clear, it’s not too nasally. It should play out really well for Twitch streamers and definitely Skype calls.

Okay, so how does the HyperX Cloud Alpha handle gaming, or just casual media consumption in general? Very well, actually. One of the main keys selling features of this headset is the implementation of dual chamber drivers that provides good separation between the bass, the mid’s and the high’s. To me, as long as it sounds great, that’s a win-win.

Now, my initial test involves listening to music, specifically tracks that emphasize on vocals, because I’d like to see how the drivers respond to higher frequencies. The Cloud Alpha does a terrific job providing excellent definition with regards to that, with great separation between the mid’s and the low ends. I wish the bass was just a tad more powerful to complete that experience. It isn’t terrible though. Bass is still very much present, and if you want to, you can definitely tweak that with an external amp or through a custom equalizer.

Next step, gaming, and boy, I had a lot of fun with this headset. I spent a couple of days playing Forza Motor Sport 7 and Battlefield 1, have to admit it took away productivity time, but it was so worth it. With Battlefield 1, gunshots felt “boomy”, I was very much aware of my position throughout the game play, since I was able to distinguish my footsteps from the ambient environment.

Playing Forza with this pair was just incredible. Take this game play, for instance. The simulation had rain, the cheering crowd, the camera flashes, the tire squealing, and a lot more, and the best part was that I was able to distinguish every layer as I was gaming, and that completed the whole experience. On top of that, you’ve got the comfortable ear cups, pretty lighter body, what else can you ask for? RGB lighting? Yeah, no, absolutely not. HyperX don’t even think about it, because I’m still trying to wrap my head around why implementation of RGB in a gaming headset really makes sense.

I think it’s about time to wrap my thoughts on the HyperX Cloud Alpha gaming headset. You see, there are so many gaming headsets in the market today, it’s really hard for the end user to pick a proper one that would sort of encompass and complete their whole gaming experience. The reason why people buy gaming headsets is, first of all, the implementation of a microphone, a good sounding microphone, and the HyperX Cloud Alpha delivers fantastic audio quality in that department.

The microphone is detachable, so you can easily toss this inside the carrying case and just use these headsets when you’re traveling to work making it a really versatile headset. I really would recommend this to anyone who’s looking for an all-round pair to complement their gaming experience, but also use this with their mobile device, because the short cable is also fairly a smart inclusion, because you don’t have to worry about longer gaming cables with some of the gaming headsets that you have to deal with.

Now, in terms of sound quality, the Cloud Alpha delivers fantastic sound signature. I would highly recommend this headset to anyone who is also looking to use this headset as a media consumption pair, so you can easily, you know, you’ll definitely enjoy your time listening to music, watching movies, and of course gaming, because that’s kind of important.

Being able to distinguish the ambient surrounding noises with your game play is important, and I think this headset did a fantastic job completing that experience. I wish that the bass was just a bit more powerful, but other than that, it’s just an all-rounder, amazing gaming headset. Highly recommend this to anyone who’s looking for a new pair, It’s a really awesome stereo gaming headset for $100. Great job, HyperX! 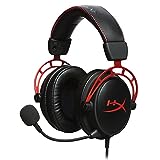 View all posts by Tom Fieldmore →